Malwarebytes has become the latest in a long line of established tech companies to jump head-first into the VPN market with the launch of Malwarebytes Privacy.
Malwarebytes Privacy is a dedicated VPN service that offers 256-bit AES encryption, a network of servers in more than 30 different countries, and, according to Malwarebytes, high-speed connections.

Why is Malwarebytes entering the VPN market now?
Click to expand...

With the majority of the world currently in lockdown, it might seem like an odd moment for Malwarebytes to launch a new product.
Indeed, a cynic might even suggest that Malwarebytes is rushing this product to market in order to take advantage of the growth in VPN use we have seen as a result of the sudden increase in remote working and home-schooling.
In their launch materials, Malwarebytes cites a report from the Office of National Statistics (ONS) which covers data from 2019, but perhaps more tellingly includes information about the spike in remote working over the past couple of months.
Their press release even admits that Malwarebytes Privacy is intended to be a suite of products with more products to be launched at an unspecified point in the future.
The clear implication here is that this VPN has been pushed out early in an attempt to capitalise on increased demand.
They would not be the first company to try and get their slice of the pie. We reported earlier this week on the launch of Google’s secure remote log-in tool BeyondCorp.
No-one can blame Malwarebytes for launching now but the question that prospective users should be asking themselves is whether this situation is likely to impact on the performance of Malwarebytes Privacy VPN.
What do we know about Malwarebytes Privacy?
Even though Malwarebytes Privacy is now live, we still don’t have a huge amount of information about it. We know it offers 256-bit AES encryption and a server network comprising of more than 30 countries, although Malwarebytes has already admitted that these are all virtual locations which is likely to impact on connection speeds.
There are claims in their launch materials about fast connection speeds and no user logs, but we are yet to test Malwareybtes Privacy or scour the small-print of their user agreements to confirm that this is indeed the case.
At the moment, Malwarebytes is only available for Windows devices at their standard pricing range, although rather confusingly, if you upgrade to their Privacy + Premium deal, Malwarebytes claims you are able to protect any device.
Prices are reasonably competitive, although it has to be said for the limited service on offer its value-for-money is questionable when compared to established premium VPNs.
It is very early days and it is possible that Malwarebytes Privacy could eventually establish itself as a leading VPN service. But this first incarnation of the service looks fairly basic, lacking in features, and playing on the Malwarebytes name rather than offering a genuinely high-quality VPN service.
Again, Malwarebytes are not the first tech company to go down this route either. Ookla, the company behind Speedtest.net also launched an average-looking VPN last month too.
Do we really need another VPN?
The biggest question mark around Malwarebytes Privacy VPN is what its purpose is? Other than potentially offering a diversified income stream for Malwarebytes and its shareholders, this is a VPN which offers absolutely nothing new and has no standout USPs.
Malwarebytes is a company that doesn’t have a flawless track record when it comes to keeping its products secure and details of the privacy policy behind this new VPN are sketchy. As a result, we don’t even know for certain that Malwarebytes Privacy is able to do the basics well.
It is slightly strange to see an established name like Malwarebytes opting to develop and launch this extremely average VPN.
Malwarebytes has a decent reputation and deep pockets. Rather than seeking to develop its own VPN from scratch and scrabbling around to find a place in an already crowded market, it would surely have been better to have bought up an existing mid-market VPN.
That would have given it an established infrastructure and customer-base to build-on rather than trying to run from a standing start.
Only Malwarebytes themselves can know why they didn’t go down this route. But they certainly seem to have life more difficult for themselves.
The VPN market is a busy one and unless a new provider can come along that offers something innovative and different, it is going to be difficult for any company to make its mark; even an established name like Malwarebytes.
When Malwarebytes Privacy suite is available in full, it is possible that this VPN might attract those customers who just want a single product that handles all their online security needs.
But until that day comes, we suspect that Malwarebytes Privacy will struggle to gain a foothold and is unlikely to give Malwarebytes the footing in the VPN sector that it so clearly craves.
Click to expand...

Adgaurd VPN is integrated in their a android adblock version long time ago
Reactions: Dave Russo, geminis3, Exterminator and 1 other person

Malwarebytes STILL hasn’t provided a privacy policy that includes the VPN. I’m just not too sure about this one. They have a decent respect for privacy on their extension these days, so I’ll keep an eye on it. Doesn’t help that it’s Windows only for now.
Reactions: Dave Russo, Stopspying and Protomartyr

DDE_Server said:
Adgaurd VPN is integrated in their a android adblock version long time ago
Click to expand...

This VPN is a new service which, at the moment, is still just a separate Chrome extension.
Reactions: Dave Russo and Protomartyr

cliffspab said:
This VPN is a new service which, at the moment, is still just a separate Chrome extension.
Click to expand...

No i mean in android App it is not new i am using Adguard for more than one year both desktop and Android app
for desktop there wasnot but for android it is not new
Last edited: Apr 24, 2020
Reactions: Dave Russo

DDE_Server said:
No i mean in android App it is not new i am using Adguard for than on year both desktop and Android app
for desktop there wasnot but for android it is not new
Click to expand...

The Android app is not a proper VPN it just uses some VPN functionality to screen ads.
Reactions: Dave Russo, CyberTech, Exterminator and 4 others

DDE_Server said:
No i mean in android App it is not new i am using Adguard for more than one year both desktop and Android app
for desktop there wasnot but for android it is not new
Click to expand...

Adguard mobile uses a local VPN to filter ads, it isnt a conventional VPN that hides your IP and browsing activities.
Reactions: Dave Russo, CyberTech, geminis3 and 7 others

blackice said:
Malwarebytes STILL hasn’t provided a privacy policy that includes the VPN. I’m just not too sure about this one. They have a decent respect for privacy on their extension these days, so I’ll keep an eye on it. Doesn’t help that it’s Windows only for now.
Click to expand...

I was reading about this VPN a few days ago and I was really surprised that a company like Malwarebytes hadn't got their privacy policy sorted out in a clear way before releasing the VPN. I'd regarded Malwarebytes fairly highly, this certainly puts doubts in my mind about them.
Reactions: Dave Russo, Protomartyr, blackice and 1 other person 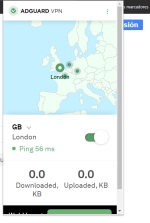 Last edited: Apr 26, 2020
Reactions: Stopspying, plat, Dave Russo and 5 others
You must log in or register to reply here.