Mozilla is working on Firefox background updates on Windows

This week, Mozilla enabled a new feature in the Nightly version of the organization's Firefox web browser designed to improve the updating functionality of the browser on Windows. The new functionality enables background updates for Firefox on Windows, even if the browser is not running at the time.

Mozilla plans to introduce the new updating functionality in Beta and Stable versions of the web browser when these hit version 89. Firefox 89 Stable will be released on June 1, 2021 according to the official release schedule.

The change improves the updating behavior of the Firefox web browser. Firefox users may use policies to block the new behavior.

the default Firefox profile (for each OS-level user) will schedule OS-level tasks that run periodically [2]. These tasks invoke Firefox in a stripped-down headless “background task mode” [3] that pumps the update cycle before exiting. These tasks have been designed to not process updates when other Firefox instances are running, so they should not force restarts of running instances; and they access (lock) the default profile for only a very short period of time so they should not prevent starting Firefox for regular browsing. If you need to disable this functionality, about: preferences should show a checkbox in the “Updates” section for you to disable, or you can set the BackgroundAppUpdate Firefox policy to false.ps forum.
Click to expand...

In other words: Firefox will use a scheduled task on the system level to run update checks, download updates and install the downloaded updates. The task is configured to run every 7 hours, but only if Firefox is not running.

The task, named Firefox Nightly Background Update followed by hex code in the Nightly version, is automatically installed by Nightly and will be reinstalled automatically as well if deleted. The name will be adjusted for Beta and Stable versions of Firefox.

Firefox users who want to disable the task need to use the Enterprise policy BackgroundAppUpdate to do so. If the policy is set to False, Firefox does not try to install updates when the application is not running. The policy affects the Firefox preference app.update.background.enabled, but just setting the preference does not have any effect at the time of writing.

If the scheduled task is deleted, it is reinstated regardless of the state of the preference. Disabling the task in the Task Scheduler on the other hand does not seem to enable it again, at least not during the same session. More data is needed to find out if Nightly updates make changes to the task's state. 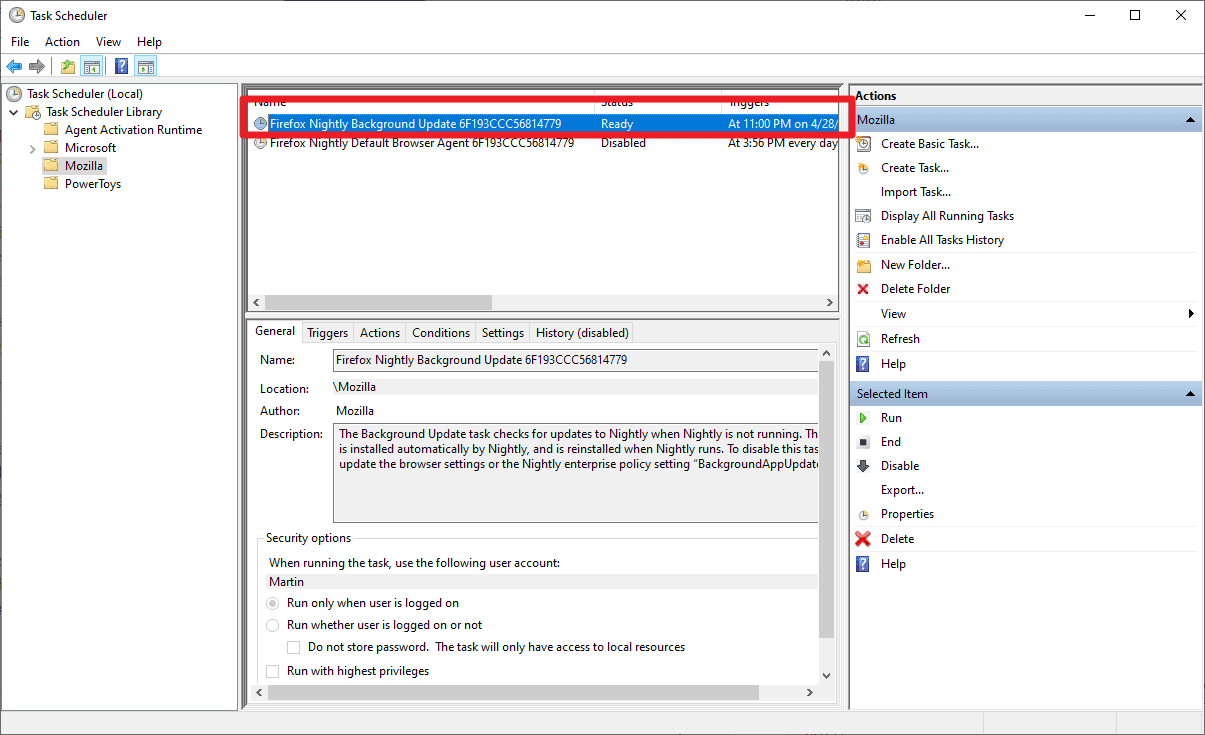 Mozilla Firefox will soon use background updating capabilities on Windows devices to check for updates, download them, and install them.
www.ghacks.net
Reactions: venustus, Gandalf_The_Grey, SecureKongo and 6 others

I hope that they will allow disabling those tasks even without GPO.
Reactions: venustus, Gandalf_The_Grey, pablozi and 3 others

Yes, I disagree with the concept. Third party apps should be updated via their third party channels. Windows Update is, at times, screwy as it is. What if the update fails? Is the browser-based updater still alive?

But the article says it's poised to move forward with June 1st update to version 89. And yeah, you wouldn't be able to delete the task or disable it, it seems.
Last edited: Apr 28, 2021
Reactions: venustus and silversurfer
S

plat1098 said:
Windows Update is, at times, screwy as it is. What if the update fails? Is the browser-based updater still alive?
Click to expand...

Firefox will use a scheduled task on the system level to run update checks, download updates and install the downloaded updates. The task is configured to run every 7 hours, but only if Firefox is not running.
Click to expand...

Oops, my mistake, corrected my prev. post. Well, that seems easier to stomach, then. But I'd rather do without.

--actually, in hindsight, the idea of Firefox updates coming via Windows update service is kind of hilarious.
Last edited: Apr 28, 2021
Reactions: venustus and silversurfer
A

Good. Eliminates the chance of a potentially exploitable version of Firefox sitting on peoples' systems.
Reactions: venustus, Gandalf_The_Grey, plat1098 and 1 other person
You must log in or register to reply here.

Firefox 90 beta auto-updates on Windows even when not running

Mozilla Firefox Yesterday at 6:56 AM
silversurfer

Firefox may soon paint all sites in dark or light mode, if you want