Your installed browser extension may be used to fingerprint you

" Extensions installed in web browsers may be used for tracking purposes. Some extensions use resources that are accessible by sites that are loaded in the browser; the information may be used to determine if extensions are installed, and even which extensions. "

Fingerprinting describes a series of tracking techniques that Internet sites and apps may use to track users. The techniques use information, either provided automatically by the browser or the operating system, or manually, through the use of scripts. Unique fingerprints are the goal, as they allow sites to distinguish between visitors accurately. Most of the time, fingerprinting is used in combination with other tracking methods.

Extension Fingerprints is an open source script that checks whether these extensions are installed in the user's browser. The developer added scans for over 1000 extensions to the script, which are the most popular ones from a user installation point of view. Popular browser extensions such as Google Translate, Honey, Avast Online Security & Privacy, Malwarebytes Browser Guard, LastPass, Cisco Webex Extension, DuckDuckGo Privacy Essentials, or Amazon Assistant for Chrome use web accessible resources.

The list can be extended to add extensions with less than 70,000 users to the mix, which would improve detections and fingerprinting.

Point your web browser to this page to run the browser fingerprinting test. The script that runs on the page checks for the existence of web accessible resources and uses the information to return how unique the fingerprint is.

The browser's fingerprint is shared with the majority of users if none of the extensions that the script scans for is installed.
Click to expand...

Websites may detect if certain browser extensions are installed; the information may be used to fingerprint the user of the browser.
www.ghacks.net
Reactions: Imranmt, Correlate, HarborFront and 17 others

For Firefox browser users. The closest you will most likely get is to go to the add-ons website and look up the permissions window of the extensions. For example, uBlock Origin shows me this: This is, because in Firefox all installed add-ons are given a different unique ID which each browser install and profile(s) too.
Reactions: Nevi, Correlate, Zartarra and 3 others
H

I just checked mine

Dark Mode and TrafficLight showed up as False. Means the extensions are tracking me, right?

Reactions: Nevi and Correlate
I

A researcher has created a website that uses your installed Google Chrome extensions to generate a fingerprint of your device that can be used to track you online.

To track users on the web, it is possible to create fingerprints, or tracking hashes, based on various characteristics of a device connecting to a website. These characteristics include GPU performance, installed Windows applications, a device's screen resolution, hardware configuration, and even the installed fonts.

It is then possible to track a device across sites using the same fingerprinting method.

When creating a Chrome browser extension, it is possible to declare certain assets as 'web accessible resources' that web pages or other extensions can access.

These resources are typically image files, which are declared using the 'web_accessible_resources' property in a browser extension's manifest file.

An example declaration of web-accessible resources is shown below: 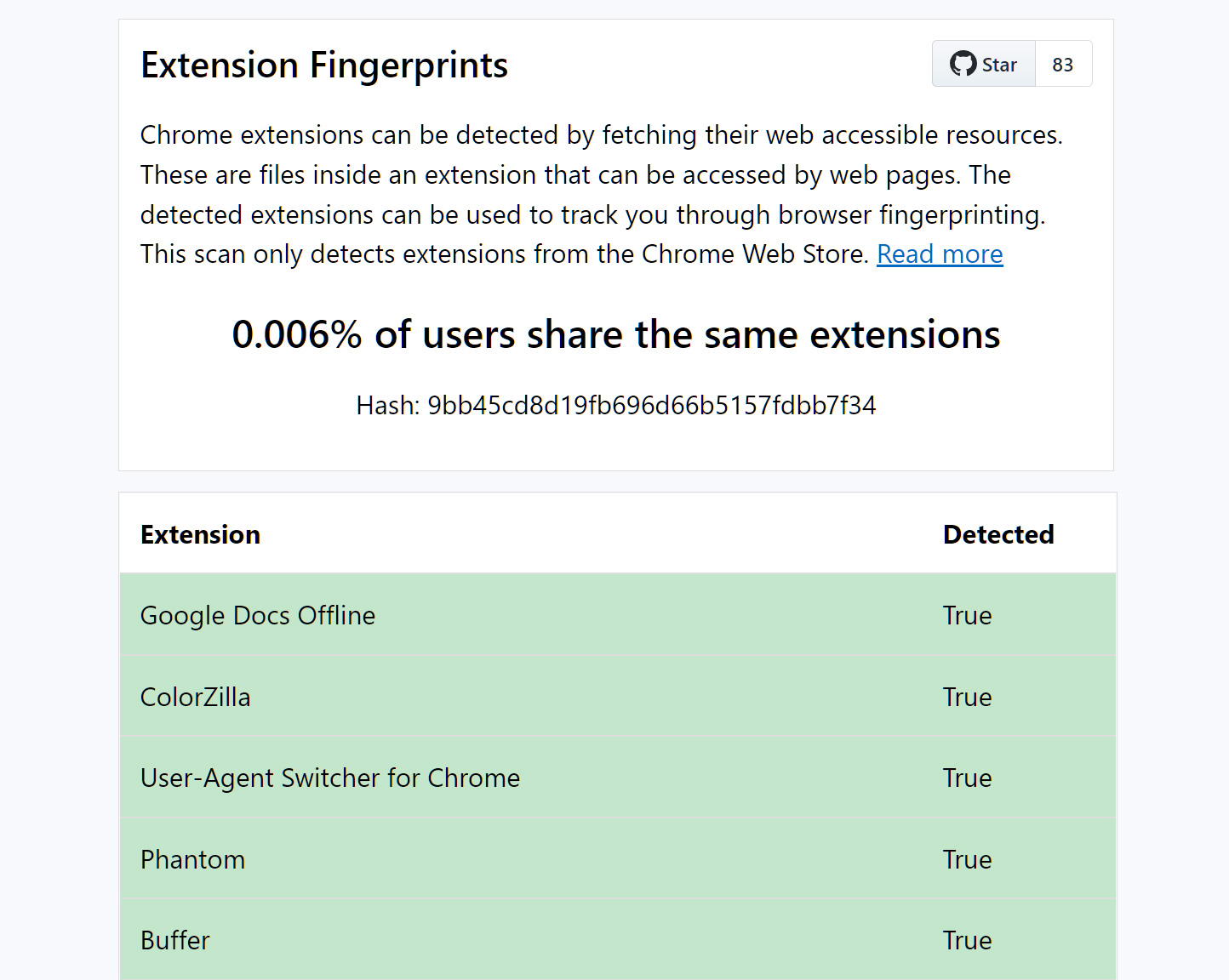 As previously disclosed in 2019, it is possible to use web-accessible resources to check for installed extensions and generate a fingerprint of a visitor's browser based on the combination of found extensions.

To prevent detection, z0ccc says that some extensions use a secret token that is required to access a web resource. However, the researcher discovered a 'Resource timing comparison' method that can still be be used to detect if the extension is installed.

To illustrate this fingerprinting method, z0ccc created an Extension Fingerprints website that will check a visitor's browser for the existence of web-accessible resources in 1,170 popular extensions available on the Google Chrome Web Store.

Some of the extensions that the website will identify are uBlock, LastPass, Adobe Acrobat, Honey, Grammarly, Rakuten, and ColorZilla.

Based on the combination of installed extensions, the website will generate a tracking hash that can be used to track that particular browser, as shown below.

Some popular extensions, such as MetaMask, do not expose any resources, but z0ccc could still identify if they are installed by checking if "typeof window.ethereum equals undefined."

"This is definitely a viable option for fingerprinting users," z0ccc explained in an email to BleepingComputer.

"Especially using the 'fetching web accessible resources' method. If this is combined with other user data (like user agents, timezones etc) users could be very easily identified."
with no extensions

The Extensions Fingerprints site only works with Chromium browsers installing extensions from the Chrome Web Store. While this method will work with Microsoft Edge, it would need to be modified to use extension IDs from Microsoft's extension store.

This method does not work with Mozilla Firefox add-ons as Firefox extension IDs are unique for every browser instance.

uBlock is the most commonly installed​

While z0ccc is not collecting any data regarding installed extensions, his own tests showed that uBlock installed is the most common extension fingerprint.

"By far the most popular is having no extensions installed. As previously said I do not collect specific extension data but in my own testing it seems that having only ublock installed is a common extension fingerprint," shared z0ccc.

Below are the percentages of users with various popular extensions installed from tests conducted by BleepingComputer.

In our tests, installing three to four extensions brought the percentage of users using the same extension to as low as 0.006%. Obviously, the more installed extensions, the fewer people will have the same combination installed.

z0ccc says the 0.006% percentage indicates that you are the only user with that combination of extensions, but this will change as more people visit the site.

Extension Fingerprints has been released as an open-source React project on GitHub, allowing anyone to see how to query for the presence of installed extensions.
Click to expand...