Apple has released a new version of Safari Technology Preview for devices running on macOS Monterey. The update brings a few features from the WebKit-based browser in macOS Ventura to its predecessor.

The current version of the app is Release 147.

Users can now select text inside images and videos, and interact with them. To use it, load a web page that has an image with some text in it, click on the words and highlight them like you would do with a normal sentence or paragraph. Now that you have made your selection, you can copy it to the clipboard, look it up on the internet, etc. 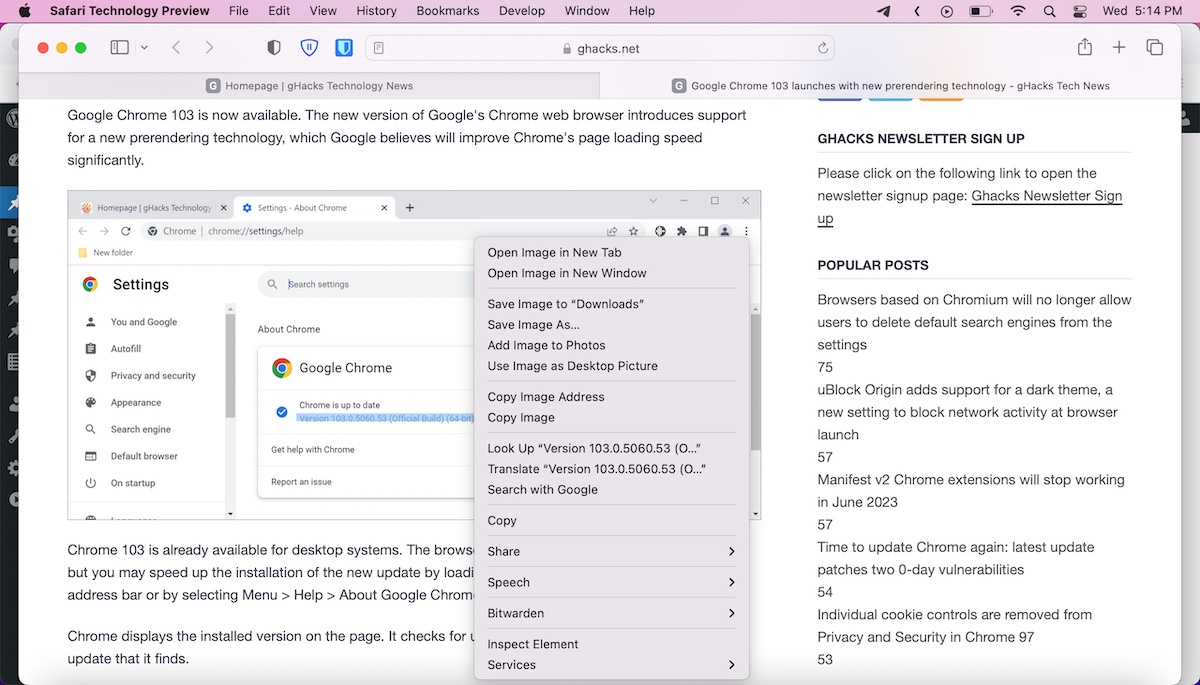 Live Text also allows you to translate text in images. It works similar to the text selection that I just described, you just need to click the Translate option from the page actions menu.

Want to try it out? Try it right here on one of Ghacks' articles.

This is the passwordless system that Apple introduced during the macOS Ventura keynote. It allows you to create logins using just your Touch ID (fingerprint) or Face ID. The feature creates a pair of unique cryptographic keys (WebAuthentication standard) for your credentials, and stores the one needed to log in on your device, while the other one is saved on the server. The passkeys on your device cannot be phished, and will sync across your devices using iCloud Keychain.

Note: Safari appears to be crashing when I try to edit my Autofill settings, so I couldn't test this feature.

Apple Safari finally supports push notifications with the latest Technology Preview, using which websites can send alerts to users who have opted-in to receive notifications from a website or web app, even if the site or app is not currently open on the user's computer. When the site pushes an alert, the message will arrive in the notification center on your Mac.

The new version of Safari also ships with various technical improvements including new extension APIs for developers to make use of, new Web Inspector Extensions, a Flexbox Inspector and more.

Shared Tab Groups is a major feature that was highlighted when macOS Ventura was announced, it is not yet available in this preview. Other features that are missing include Syncing for Tab Groups, site setting and web extensions, etc.

Apple says that these features are not enabled in the current release, this suggests that they may be made available in a future release.
Click to expand...

If you want to try the new options right now, you may download the Safari 16 Technology Preview from the Apple Developer's resources portal. You can safely install the app alongside Apple Safari 15.5, it does not affect your current version. Your machine needs to be running on macOS Monterey 12.3 or later to use the beta version of the browser.

Speaking of supported versions, the release notes on Apple's website states that Safari Technology Preview will no longer be available for macOS Big Sur.
Click to expand...

Apple Safari 16 Technology Preview is now available for macOS Monterey. You can test some features that have been added from macOS Ventura.
www.ghacks.net
Reactions: Nevi, Idanox, SpiderWeb and 2 others