is mrg-effitas still getting blocked by Bitdefender? Last night I submitted the false positive report to them but surprisingly they said they were not able to reproduce it on their end and asked for a screenshot of the detection. I did that and since then I've received no further reply from them. It's weird. But can you check again?
I have to add that this was their Enterprise submission portal so they tested it on their Enterprise (Gravity Zone) product. So the problem probably for some reason happens on the home users version only.
Edit: I understand what they meant by "The URL is not blocked".
It means the site specifically is not blocked by their database. So probably Bitdefender is falsely detecting some sort of malicious javascript or something similar like that on the website and blocking it entirely.
View attachment 259531
Click to expand...

The mrg effitas site is still blocked by my BD

Reactions: Zartarra, MacDefender, venustus and 3 others

Okay so just what I suspected. It's detecting a malicious javascript on the site. Looks like a heuristic detection and pretty sure it's a false positive. We'll have to wait till they fix it.
Reactions: Zartarra, roger_m, JB007 and 2 others

don't like to hijack this thread but fun part is still it gets blocked!!! after nearly a week. really low response time from Bitdefender. but there is another aspect maybe they are right and there is a problem in MRG site. I use Bitdefender on my own laptop and cellphone (we have 12 system in our home different security products some with Kaspersky which doesn't block) and it still blocks this site. since the detection is based on heuristics the possibility of it false positive is much higher.

edit: I think mrg is a well known test site , being blocked by Bitdefender after all this time seems some thing maybe are not right in mrg site too.they should have see this by now.
Reactions: venustus, Zartarra, Gandalf_The_Grey and 3 others

SeriousHoax said:
Okay so just what I suspected. It's detecting a malicious javascript on the site. Looks like a heuristic detection and pretty sure it's a false positive. We'll have to wait till they fix it.
Click to expand...

Hello,
Just for fun, the page is still blocked by BD
But the threat name is a little different (the numbaers)... 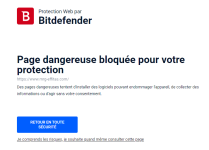