Updates LibreWolf Browser - A fork of Firefox, focused on privacy, security and freedom

LibreWolf Browser
A fork of Firefox, focused on privacy, security and freedom. Reactions: Sunshine-boy, Nevi, Cortex and 16 others
Sort by date Sort by votes

Interesting, we will see once it's out
Reactions: Cortex, Tutman, Correlate and 5 others
Upvote 0 Downvote

Could be ok, could be very bad, we will see.
Reactions: Cortex, Tutman, Correlate and 1 other person
Upvote 0 Downvote
A

ghacks template breaks a lot of functionality. If it's already implemented natively without consulting the user first it's going to be one frustrating browser to use.
Reactions: Cortex, Correlate, Andrew999 and 2 others
Upvote 0 Downvote
H

Arequire said:
ghacks template breaks a lot of functionality. If it's already implemented natively without consulting the user first it's going to be one frustrating browser to use.
Click to expand...

I believe you can edit the preference settings for a relax browser like this redditer below....................in which case your privacy/security won't be the best as expected of the browser. I believe he must be using the Linux version for the Windows version is not ready

I don't like some of the default (about:config) settings on librewolf, it's too aggressive from a privacy perspective as a daily browser, so I had to revert some of those (like privacy.resistFingerprinting, and privacy.clearOnShutdown.cookies ; it's no fun to start the browser windowed, and have to re-login to each website every time).

Please not another non-maintained fork.

Thanks for this news, this looks like it could well be an interesting development. I'm going to try LibreWolf out.
Reactions: Cortex, roger_m and Correlate
Upvote 0 Downvote
H

Yes, the previous LibreFox was not maintainted. In fact, the now LibreWolf is the successor to the earlier LibreFox Due to the halting of development on this repository, we have created a new, community run successor to LibreFox, called LibreWolf. Check out the new organization here! https://gitlab.com/librewolf...

The version v2.1 was released some years back with the gHacks/pyllyukko base at v64. The gHacks-user.js version now is v77 keeping inline with FF release Wish it was on Chromium, because FF is still far away with their own engine on mobiles.
Reactions: Cortex, Andrew999 and Correlate
Upvote 0 Downvote
H

blacksheep said:
Wish it was on Chromium, because FF is still far away with their own engine on mobiles.
Click to expand...

Firefox Preview has only received a significant update with version 5.2 with improved tab management and voice search a few days ago, but Mozilla is already working on the next feature-filled update. The unstable Nightly now supports three new add-ons and sees smaller refinements to the three-button overflow menu. The dead-space custom tab bug that's plaguing the current Firefox Preview build is also nowhere to be seen.

The three new extensions in question are the privacy tool Decentraleyes, tracking blocker Privacy Possum, and YouTube High Definition, a simple tool forcing HD on YouTube videos and bringing overall enhancements to the website. Other than that, the overflow menu has seen small improvements. There's now an always-visible Synced tabs shortcut for quick access to sites opened in other Firefox instances, and the Add-ons shortcut has an arrow, indicating that you open another overflow menu when you tap it. To my delight, the Nightly release also got rid of some dead space in custom tabs that's currently plaguing the more stable preview build. Firefox Preview has only received a significant update with version 5.2 with improved tab management and voice search a few days ago, but Mozilla is

I don't think so

Repositories for building LibreWolf on various platforms including several linux distributions and macOS.

I managed to launch LibreWolf in Linux Mint Mate (in VB) using command line but don't know how to save it to the desktop as an icon (or shortcut) for launch. See picture below The problme is that I must keep the terminal open. If terminal is close then LibreWolf also closes. The next time to open it I'll need to open terminal and key in the commands again. I need to get it installed instead of just launching...................

I used Librefox config until Mozilla launched Firefox version 77. I only had a few problems with the configuration. With version 77 I had a lot of issues and switch back to the ghacks config and some custom setting.

I will surely test LibreWolf.

In term of privacy, Firefox is still beter than Chrome builds. Irridium and UnGoogledChrome are close.
Reactions: Cortex, HarborFront, Stopspying and 1 other person
Upvote 0 Downvote
H 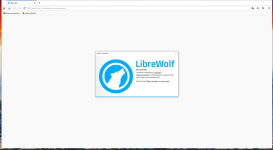 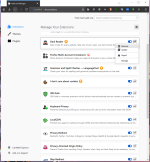 Well, this is still an experimental build so expect some bugs

Note that with LibreWolf all cookie-controlled extensions (eg. Cookie AutoDelete, Foregt Me Not etc) would not be useful as ALL cookies are cleared on exit as explained below. Also, FF Multi-Account Containers cannot save the password of a site after you exit the browser as the cookies are deleted. You'll need to sign in again

Searching for a addon at about:addons leads me to a blank new tab. (#16) · Issues · LibreWolf / Browser / Windows

As LibreWolf browser is a hardened FF browser many of the settings in its about:config are locked from users. Below is a comparison of the two browsers' settings - LibreWolf is on the left and FF on the right

Last edited by a moderator: Feb 22, 2021
Reactions: CyberTech, silversurfer, Upendra19 and 6 others
Upvote 0 Downvote
U

On the windows all fonts and content looks blurry. It is a bug or feature?? Mine is ok. Why is yours missing the General, Home, Search and Privacy & Security wordings on the top left side and the Extensions & Themes and LibreWolf Support wordings on the bottom left side? @HarborFront
LibreWolf processes are fully signed by owner/developer ? (I meant like Firefox processes signed by Mozilla)
Reactions: CyberTech and Upendra19
Upvote 0 Downvote
U

HarborFront said:
Mine is ok. Why is yours missing the General, Home, Search and Privacy & Security wordings on the top left side and the Extensions & Themes and LibreWolf Support wordings on the bottom left side?
Click to expand...

Are you on linux or windows? They were automatically adjusted. Because screen size is low (15 inch Laptop) and both windows were opened side by side.

S
Q&A Firefox Private Network is not a VPN