Q&A uMatrix has an unfixed vulnerability: here is a workaround

The uMatrix browser extension is still in use. Google's Chrome Web Store, on which it is still listed, reveals that it has more than 100,000 users, a figure that can be higher as Google does not echo total number of users to the public. The Firefox extension, for which I wrote a guide in 2017, has more than 29,000 users at the time of writing.
Click to expand...

An attacker may exploit the vulnerability to get the extension to crash or cause memory exhaustion according to the researcher. When the extension crashes, users are left without protection until it is reloaded.

It requires that users become active, e.g. by clicking on a link.

The strict-blocking warning page is only displayed when direct navigations are blocked. This means that malicious hosts would need to induce users to trigger a navigation somehow, such as by clicking a link. iframes are classified as sub-documents and do not trigger the warning page, which should make it harder for malicious hosts to exploit this vulnerability in the background.
Click to expand...

The researcher tested a proof of concept vulnerability against Chrome, Firefox and Pale Moon. Only the Chrome extension crashed during tests.

Raymond Hill was notified before the security issue was disclosed publicly, and a fix was created for uBlock Origin within one day and published the next. The maintainer of nMatrix published an update to the Pale Moon add-ons site that fixed the issue in the extension as well.

The uMatrix extension is not maintained anymore, which means that it is still vulnerable and will remain so.

How to mitigate the vulnerability

The researcher notes that users need to disable all filter lists on the "assets" tab of the uMatrix dashboard. Subscribing to malware or multi-purpose filter lists may reduce the impact the change has on the blocking of the extension.

To mitigate the vulnerability for now, users can disable uMatrix’s strict-blocking support by unselecting all of the filter lists on the "Assets" tab in the uMatrix dashboard. They can also enable all of the "Malware domains" and "Multipurpose" filter lists in uBlock Origin to help offset the lost filtering coverage.
Click to expand...

With development having ended some time ago, it may be time to move to a different extension for content blocking, especially since it has an unpatched vulnerability now. While it seems unlikely that it is going to be exploited in large scale attacks, it is still something that users need to be aware of.
Click to expand... 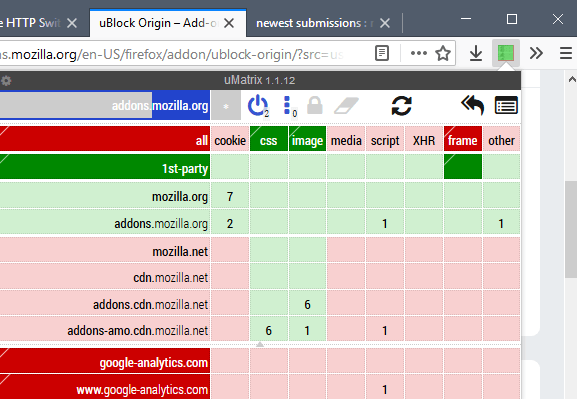 uMatrix has an unfixed vulnerability: here is a workaround - gHacks Tech News

A vulnerability was disclosed recently that affects the discontinued but still popular browser extension uMatrix. A workaround is available!
www.ghacks.net
Reactions: JoyousBudweiser, Venustus, Gandalf_The_Grey and 1 other person

I discovered this bug while browsing the uBO codebase, which was a bit surprising given how basic the finding is. Even more surprising is that this vulnerability seems to have existed in uBO since 2015[2] (and in uMatrix since 2017[3]). Perhaps the extension has not received as much attention...

malwaretips.com
Patched in uBlock Origin 1.36.2, not patched in uMatrix because it is EOL.
Important part about uMatrix:

With development having ended some time ago, it may be time to move to a different extension for content blocking, especially since it has an unpatched vulnerability now.
Click to expand...

While it seems unlikely that it is going to be exploited in large scale attacks, it is still something that users need to be aware of.
Click to expand...

Workaround for security issue in 7-Zip until it is fixed