Q&A What router are you using?

I’ve been trying a new secure router (Gryphon), switching from an ASUS. I had used ASUS for over 10 years. Some features I assumed were common for all router firmware aren’t part of their system. So it got me thinking of what else I might look at. I’m going to be in a medium sized home (1800 sqft) and am replacing my AC68U with Merlin firmware. I had my heart set on an AC86U to replace it, but then I read about the Gryphon. I’m feeling the pinch of missing a quality custom firmware with a good range of options. But the 86U has some issues with quality control it seems. So I was wondering what routers everyone else runs? What do you like about the features? How’s the security?
Reactions: simmerskool, stefanos and oldschool

You wouldn't want to know so I won't say.
Reactions: stefanos, SeriousHoax and blackice

The jealous type, are we?
Reactions: oldschool and blackice

I'm using absolutely nothing advanced. Just the one provided by my ISP: 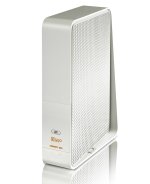 
Gandalf_The_Grey said:
I'm using absolutely nothing advanced. Just the one provided by my ISP:
Click to expand...

Hello, I am using the router provided by my ISP(STOFA), and I just got their new model Friday: White Technicolour Router.
Reactions: blackice

The less, the better, but it still supports too much. I have got $20 worth TL-WR940N. I have disabled all possible features: WPS, UPnP, VPN, ALG, DHCP, IPv6, MAC Filtering. I keep SPI Firewall to filter some unsolicited traffic. I set it to 20MHz (2,4GHz) and 11n only to limit the number of compatible devices. Subnet is set to 255.255.255.248 to limit the number of hosts to 5. I use 63 special characters long WPA2 password.

Before you ask, I have recently found out, that MAC Filtering is not a security feature (just like hiding WiFi name turns the computer into a beacon). MAC address is not sent encrypted, so a hacker can sniff and copy it within minutes, it can only make WiFi connection more problematic, because every single packet has to include MAC address for verification. Imagine typing your windows password like 50 times per second, it is useless.

It sucks, there are some known vulnerabilities, but as with all cheap routers, they are released and forgotten. The latest firmware is from 2016.
Reactions: blackice, simmerskool and oldschool

TairikuOkami said:
sucks, there are some known vulnerabilities, but as with all cheap routers, they are released and forgotten. The latest firmware is from 2016.
Click to expand...

Same with my ISP, which at least is local and is committed to net neutrality. However I am too lazy to get a new router and figure out how to bridge it with the current one. And if I did that, I'd still be left with the same question as OP: Which ones are worth a d**n?
Reactions: blackice, stefanos, simmerskool and 1 other person

I only picked up this one, because it supports IPv6 and with all the scareware, they were like, IPv4 only will be cut from the internet. 10 years later and IPv6 is still far from being implemented, my ISP does not even support IPv6, since IPv4 pools are limitless. I am behind 6 routers overall.
Reactions: Handsome Recluse, blackice, simmerskool and 1 other person

Just the one provided from my ISP TairikuOkami said:
The less, the better, but it still supports too much. I have got $20 worth TL-WR940N.
Click to expand...

Haha, I have the same router.
Reactions: blackice