8 reasons to ditch Chrome and switch to Firefox

Chrome may be the most used browser, but it isn’t necessarily the best one out there. Alternatives exist that could better meet your needs.

One such option is Firefox. It’s a rare browser not based on Chromium, the project that powers Chrome, unlike other rivals like Edge or Opera. It’s also backed by a team with a long, storied history in browser development and a deep interest in online privacy. As a result, using Firefox can boost your PC’s performance, better protect you on the web, and also make life more convenient, too. You’ll find it offers built-in features that don’t exist in Chrome or otherwise require third-party add-ons.

Many websites have videos and other media that automatically play when you load the page. But not all automatically mute the audio, despite near-universal hatred for having sudden noise blaring in the background. Autoplay video can eat bandwidth unnecessarily when you’re on a connection with limited data.


In Chrome, if you want to block sites that go hard with autoplay, you need to find and install a third-party extension. Firefox, on the other hand, keeps tabs in hand by default. Out of the box, audio is muted, and for YouTube, autoplay for both audio and video are blocked. And blocking autoplay video across the web by default is a easy, fast change in Firefox’s settings.

A fresh installation of Firefox automatically blocks trackers that can make browsing feel slow. The more scripts that must load as part of a website, the more you’ll feel them. Even if they’re running invisibly in the background, they’re still there. Keep them from running and your web surfing should feel much snappier.

Firefox also stops cryptominers from accessing your device, aka cryptojacking—it’s when a website allows malicious code to use your computer to mine for cryptocurrency. Indirectly, this protective feature helps with browsing speed too. If your system resources get tied up by a cryptominer accessing your device, your PC will feel sluggish, including when you’re browsing online.

Chrome has a reputation for hogging system resources—namely RAM, but sometimes it also hits your CPU harder than expected, too. Google has taken steps to curtail these problems, but Firefox hasn’t had the same issues with regular memory leaks. It also generally goes light on system resources. Even when you begin piling on tabs and windows, browsing sessions don’t slow down.

That said, Firefox can occasionally suffer from memory bloat as well, if you like to leave many tabs open for days. But you can quickly fix that problem by using Firefox’s Task Manager to nuke and then bring back a tab gone amok. Or, if you have the browser set to remember your browsing history, closing the app entirely and reopening it. (Your tabs should be automatically restored.) You don’t need to reboot your whole system.

Beyond automatically keeping third-party cookies and trackers from gathering data about your browsing habits, Firefox also blocks fingerprinting, a more insidious method of monitoring people across the web. A digital fingerprint collates information about your PC’s hardware, software (like your operating system and browser), add-ons, preferences, and sometimes more like themes and customizations. The tracking of a fingerprint can take place over months or even longer, meaning whoever looks at the data can form a clear picture of your private life and habits. Think of it as a more invasive form of someone stalking you via public Instagram and other social media accounts—but instead, they’re learning information you haven’t chosen to share publicly. Maybe not even with your closest friends and family.

Firefox also allows users to enable DNS-over-HTTPS (DoH). Normally when you enter a URL (e.g., PCWorld) into your address bar and hit enter, the lookup of the IP address that the domain name resolves to is done over plain text. Meaning, anyone on your network can see what sites you’re accessing. But if you force the process to happen over an encrypted server, you thwart any such attempts at nosiness.

What makes Chrome so bad, you ask? The big issue for most is having all of your data locked to a company that makes its money through advertising. (Recall the saying that if a service is free, you’re the product.) That’s a large privacy concern.

But beyond that, it’s harder for the community to vet the security of Chrome, too. Despite being built on an open-source project (Chromium), the official Chrome browser mixes in Google’s proprietary spin on that code and keeps the final results under wraps. Users can’t examine for themselves how things are constructed. Many people don’t think about this as an issue, but knowing how something is made can tell you a lot more about its weaknesses—and any other elements that might not sit well with you. With Firefox, that’s not an issue.
Click to expand...

Another thing is that Firefox uses more CPU and pages load a lot slower than on Chrome(ium), the amount of RAM an browser uses is irrevelant if you have 8 GB of ram or more.

Yeah, this blog is The Holy Grail for "special" users of Chrome, does anyone really believe such nonsense written by an self-proclaimed expert

Well, you are wrong on this point for sure, although may depends how effective is this feature:

Fingerprinting Protection is an experimental feature that is under heavy development in Firefox.

silversurfer said:
Yeah, this blog is The Holy Grail for "special" users of Chrome, does anyone really believe such nonsense written by an self-proclaimed expert

Well, you are wrong on this point for sure, although may depends how effective is this feature:

Fingerprinting Protection is an experimental feature that is under heavy development in Firefox.

If you had actually read the article, you would have come across this:

Also, use Firefox, go to any site that tests your browser fingerprint and dare to tell me it will report as anything but unique. And yet it still beats Google to quote from the same site.

Which is why I said this, I never claimed it didnt beat Chrome, I am just saying it isnt as privacy friendly as most people make it out to be, at default that is.

Also, modern tracking methods use your digital fingerprint, meaning that fancy tracking blocking (Which contains whitelisted trackers) wont do much when you cant protect your users from fingerprinting.

ScandinavianFish said:
Also, use Firefox, go to any site that tests your browser fingerprint and dare to tell me it will report as anything but unique.
Click to expand... 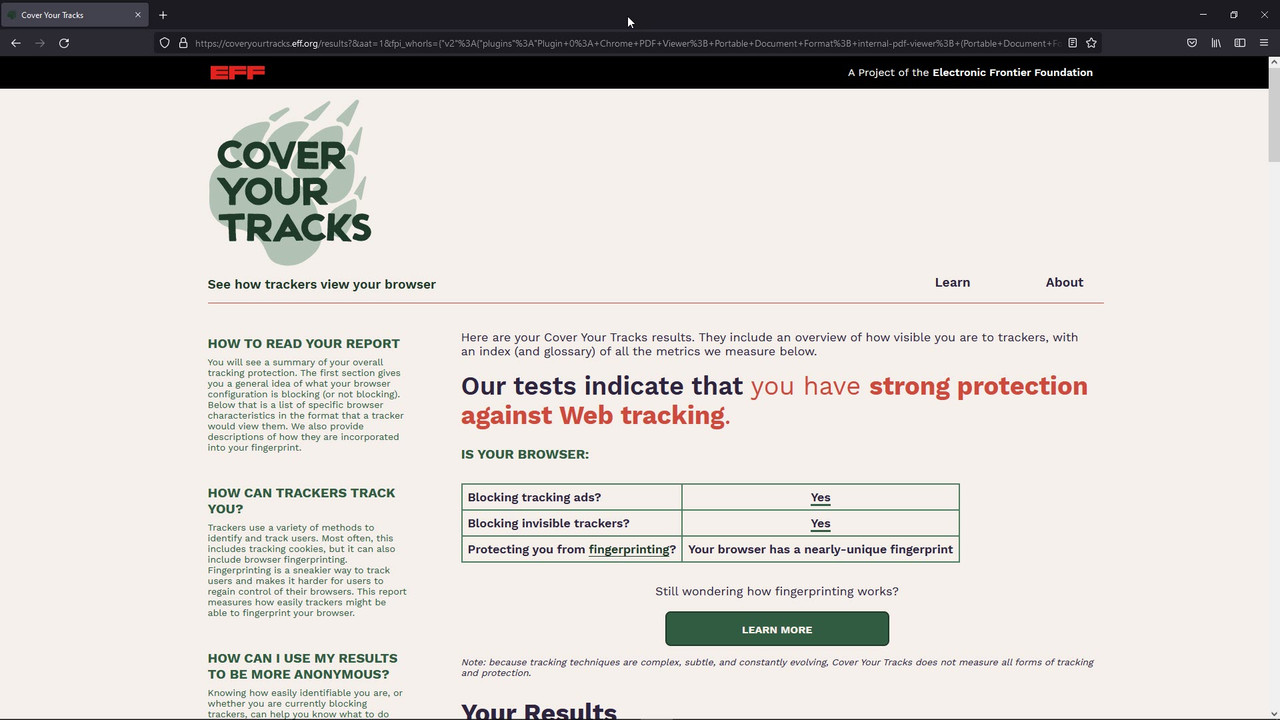 ScandinavianFish said:
If you had actually read the article, you would have come across this:

Also, use Firefox, go to any site that tests your browser fingerprint and dare to tell me it will report as anything but unique.View attachment 267099
Click to expand...

I knew very well this blog, here a former forums member mentioned the same stuff for several times.
Why should I care about all researchers who are listed there, how are those people verified as experts, twitter is not always a real sign
In this article, some points are true but not all, believe it or not, it's up to everyone what he believes...
Reactions: Sorrento, BryanB, blackice and 2 others
S

how are those people verified as experts
Click to expand...

Maybe if you did some research you would know why.

ScandinavianFish said:
Maybe if you did some research you would know why.
Click to expand...

1st, you should quote correctly, the full comment and my username included.
2nd, I don't need to waste my time with research about those people you linked, the short version is clear:
Chrome and chromium based browsers are more secure than Firefox.

I will ignore all further comments from you, but I guess you will continue posting as you want to be always the one with the last word...
Reactions: Asterixpl, Sorrento, Thales and 3 others

I tried the Cover Your Tracks website with three browsers: Chrome, Firefox and Edge.

This is Chrome and Firefox.

Reactions: Asterixpl and Sorrento
A

I see this page posted a lot when people discuss Chromium vs Firefox. The problem with it is Firefox being less secure in theory doesn't equate to it being less secure in practice, and it certainly doesn't establish Firefox as being insecure (which is generally the implication when this checklist is posted).
Vulnerabilities that're disclosed or being actively exploited are promptly patched, and Mozilla continues to improve Firefox's security architecture (albeit slowly).

Frankly, I find Madaidan's warning against the use of Firefox rings hollow when I and presumably millions of other Firefox users have never encountered a security issue involving the browser.
Last edited: May 31, 2022
Reactions: Asterixpl, Sorrento, plat and 1 other person
L

ScandinavianFish said:
If you had actually read the article, you would have come across this:

Also, use Firefox, go to any site that tests your browser fingerprint and dare to tell me it will report as anything but unique.View attachment 267099
Click to expand...

Maybe he did, this so called experts are not even aware AutoPlay has been a feature in Chrome for a good while now (no need for addons), that is enough to ruin their so called expertise, no need to read below the first so called "fact".
Reactions: BryanB

This is with my Chrome: Ps: With Brave I got a randomized fingerprint as expected.

Ps 2: This nearly-unique fingerprint is a bit misleading, all LibreWolf users should have the same fingerprint, so its tracking protection is nothing short of stellar.
Last edited: May 30, 2022
Reactions: bayasdev, Sorrento, ColonelMal and 1 other person

Sammo said:
This is with my Chrome:
View attachment 267113
Click to expand...

What settings/extension do you use to achieve that result? I researched for a bit but nothing came up to me.
Thanks
Reactions: Sorrento and Sammo

Ps: With Brave I got a randomized fingerprint as expected.

Ps 2: This nearly-unique fingerprint is a bit misleading, all LibreWolf users should have the same fingerprint, so its tracking protection is nothing short of stellar.
Click to expand...

peterfat111 said:
What settings/extension do you use to achieve that result? I researched for a bit but nothing came up to me.
Thanks
Click to expand...

I use the JShelter extension that will completely block fingerprinting.
Reactions: plat, Wontkins, Neno and 3 others
You must log in or register to reply here.