Update Here is what is new and changed in Firefox 58.0.2

Verified
Malware Hunter
Mozilla plans to release Firefox 58.0.2 to the stable channel in the next 24-hour period. The new version of the browser fixes two crash issues, a signature issue on Mac OS X devices, and issues on Microsoft's Hotmail and Outlook web mail service.

The new version of Firefox updates the release channel of the web browser. It is the second minor update following the release of Firefox 58.0 which was released on January 22, 2018.

Firefox 58.0.1 patched a critical security issue in version 58.0 and a blank page load issue on Windows for certain security configurations.

Firefox users can run a manual check for updates in the browser with a click on Menu > Help > About Firefox. Firefox should pick up the release (as soon as it is released officially), and download and install the update automatically on the system.

Firefox 58.0.2 is another minor release for the release channel. It fixes two crash issues in the browser:

Firefox users who ran into these issues may want to update the browser asap to resolve the issues.

The new stable version of Firefox addresses two additional issues. The first addresses an issue on Mac OS X systems where updates to the browser may lead to signature issues sometimes.

We will update the article when the official release notes are published by Mozilla. It is not uncommon that they list other changes that preliminary release notes don't cover.

The next major Firefox stable release is expected on March 13, 2018 according to the current Firefox release schedule.

Source: Here is what is new and changed in Firefox 58.0.2 - gHacks Tech News

Verified
I really wish that they would fix the font rendering. I'd like to use it so bad...
Last edited: Feb 7, 2018

Marko :) said:
I really wish that they fix the font rendering. I'd like to use it so bad...
Click to expand...

submitted 3 months ago by freetux Chrome

I'm on Windows 8.1 and Firefox Beta is really nice. One thing I observed is that on some pages like Facebook, for example, the fonts look like crap. I'm not going to talk too much about this, I'll leave the fix here.

Go to about:config, search for gfx.font_rendering.cleartype_params.force_gdi_classic_max_size and change the value to 6. It should be 15 by default.
Good day!


It's great! Font rendering on Windows in general is really bad compared to, say, Ubuntu. I previously used GDI+ then MacType, but upgrading to Windows 10 rendered the latter unusable (though there seems to be update but I don't bother re-setup).

So my "solution" was using violentmonkey to replace those bad fonts (e.g. Arial) with something better (e.g. Cabin). It didn't always work as sometimes elements of the web page loaded differently and the bad font were not replaced.

Your suggestion however works very well! Now I can ditch violentmonkey as the font replacing script is the only script I use.

Verified
@Prorootect Thanks. I've tried that and font appears blurry on some pages. I remember that there was an add-on which used to fix the fonts so they would be like in Chrome, but as far as I know, it isn't compatible with Firefox Quantum.

Verified
... and recently I've fixed bad font rendering in my new Nightly version, go to Options/Content/Advanced/Minimum font size from none to 15 or 16...

... or try what you wish to don't have blurry rendering. 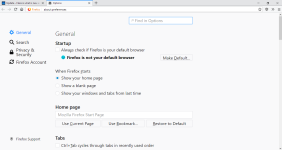 Correct rendering always seems to be a problem with Firefox but I stick with it anyway.

I had to switch to None because web pages and text inside Firefox looks terrible. I don't need that big font. I hope they'll fix that sometime in the future.

Verified
I've changed (in Nightly) minimum font size to 15, and it's OK.

Now, I use Dark Background and Light Text – Add-ons for Firefox - on Default preference. Must have.
Last edited: Feb 7, 2018

Verified
I'll try it tomorrow but I'm not sure if it will make any difference except change font color. I'm going to sleep now.

Verified
So the session will be closed today...Good Night to everyone! Firefox Here is why the user count dropped for nearly all Firefox add-ons
Jun 27, 2020
Jan Willy