There is a problem with updating from the Edge menu.
After applying it, I follow the instructions to restart Edge, and it asks me to restart again; it hasn't changed since 90.0.818.51. Strangely, however, the app in the settings section shows 90.0.818.56.

The update was applied properly without this problem on another PC, so I think it's an individual environment issue, but I'm finally considering reinstalling the app since changes and fixes from the app don't improve the situation.
Reactions: venustus, plat1098, TairikuOkami and 5 others

show-Zi said:
There is a problem with updating from the Edge menu.
Click to expand...

I had to do it several times till in kicked in. About - Edge said updating and without a hitch to restart, but it did not actually download nor install anything, until the last time.
Reactions: Nevi, venustus, plat1098 and 4 others

TairikuOkami said:
I had to do it several times till in kicked in. About - Edge said updating and without a hitch to restart, but it did not actually download nor install anything, until the last time.
Click to expand...

No matter how many times I repeated it, there was no change. I wanted to clarify the ending, so I reinstalled the edge and solved the problem. Along with a small sense of accomplishment, I feel a sense of defeat as if I had abandoned the match.
Reactions: Nevi, venustus, brambedkar59 and 6 others

Microsoft says Edge 91 will be the best-performing browser on Windows 10:

Microsoft's Build event for 2021 is about to kick off, and with it comes a torrent of announcements for developers and businesses. But there's also some news for Edge users, which are getting an update to version 91 later this week. Microsoft has said that, after the update, Edge will be the most performant browser on Windows 10, thanks to improvements made to two features: startup boost and sleeping tabs.

First off, startup boost will help Edge launch even faster by running some core Edge processes in the background. Microsoft says this doesn't use additional resources when Edge windows are open. Naturally, to keep background processes running, some resources do have to be used before the browser is opened, though.

As for sleeping tabs, Microsoft says it can help you save up to 82% in memory usage by putting inactive tabs to sleep. When a tab is put to sleep, Edge can do things like pause ads immediately, saving up resources right off the bat. There are also some Windows-specific improvements to save system resources in this update. You can customize sleeping tabs so they're put to sleep after a specific period of time, and protect certain websites from going to sleep if there's a risk of losing important content.

Edge 91 is currently available in the Beta channel, so we already have a good idea of what other features will be in the stable release, like new color themes available out of the box, a new price history feature, and a password monitor.

These user-facing announcements come on top of some developer news like the general availability of WebView2 in WinUI 3. Additionally, PWAs can now be submitted to the Microsoft Store.
Click to expand...

Microsoft is releasing Edge 91 later this week, and it will include improvements to sleeping tabs and startup boost that will make it the most performant browser on Windows 10, according to Microsoft.

Gandalf_The_Grey said:
Microsoft says Edge 91 will be the best-performing browser on Windows 10
Click to expand...

Hmm, well we'll see about that. I'm checking out these new-ish features but they're kind of hidden and obscure--how typical of Microsoft, right?

1. Browser task manager (right-click on an empty space around the rim of the browser, it's in the menu 2nd from bottom).
2. Web Capture (within the three-dots menu, under "Print." OR right-clicking somewhere on the webpage OR showing the widget on toolbar via Settings/Appearance) Source

One issue w/the task manager is that it's not always on top so the Web Capture couldn't um, capture it. I had to use Snipping Tool. Further, in order to get the image from Web Capture, I had to open Paint3D and paste it in. If anyone knows of a better way to get your image, pls. tell. Opera's version is superior in this respect.

Anyone using these with any regularity? What do you think? Apologies if someone already posted an opinion, this thread is so big. 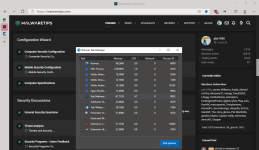 Edit: aha, startup boost and sleeping tabs will make v. 91 hot to trot. Well I don't use either since Edge runs like a top regardless. In what scenario would you use these? If you don't have a lot of memory installed?
Last edited: May 25, 2021
Reactions: Stopspying, ZeePriest, CyberTech and 9 others

Gandalf_The_Grey said:
Microsoft says Edge 91 will be the best-performing browser on Windows 10:
Click to expand...

I thought it was already for some time.
Reactions: ZeePriest, silversurfer, venustus and 4 others

Gandalf_The_Grey said:
Microsoft says Edge 91 will be the best-performing browser on Windows 10:
Click to expand...

In fact, I think it has to happen for the sake of Edge's existence.
Reactions: ZeePriest, upnorth, silversurfer and 5 others

plat1098 said:
Edit: aha, startup boost and sleeping tabs will make v. 91 hot to trot. Well I don't use either since Edge runs like a top regardless. In what scenario would you use these? If you don't have a lot of memory installed?
Click to expand...

My user experience for "sleeping tabs" (manually enabled via flags) it works flawless since more than 6 weeks, RAM memory usage lower than before

"startup boost" below guide (from yesterday) shows how to disable completely: Find out how to turn of Startup Boost, a new Edge feature that loads the web browser during system start on Windows devices.
www.ghacks.net
Last edited: May 26, 2021
Reactions: Stopspying, ZeePriest, plat1098 and 9 others

Summer is almost here and for many this means planning family camping trips, outdoor barbeques and fun in the sun. This month, we’re excited to announce several new features that highlight why Microsoft Edge is the best browser for shopping. Onli Microsoft Edge 91 update is now rolling out gradually on Windows 10 and macOS. The update will be downloaded and installed automatically in the coming days or weeks, but users can always manually download Microsoft Edge 91 by checking for updates in the settings. Edge 91 comes with performance... 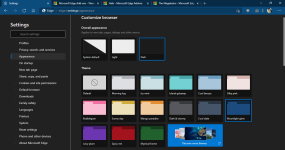 Reactions: Protomartyr, venustus, Stopspying and 9 others

Did anyone actually apply any new theme? Some look a little too much like candy, but I did settle on "Morning Fog" myself. The name sorta reminds my of myself in the early hours, staggering for the coffee. Looks pretty nice, though. I have a custom image on the new page that coordinates with it. Too bad the "search the web" bar is there--someone told me about getting an extension for that. Hmmm.
Reactions: SeriousHoax, venustus, Stopspying and 9 others

MS trying to be smart? When DNS blocks a webpage (malware/filtering), Edge tries to connect using GoogleDNS.
While it is an interesting feature, it beats the point of DNS filtering and most people just do not block outbound.

Reactions: Protomartyr, SeriousHoax, venustus and 9 others

If you cannot enter the room from the entrance, enter through the chimney.
There may be such a hidden function.

Compared to other chrome-derived browsers, I think it's good that Edge responds quickly to updates.
Reactions: SeriousHoax, venustus, Stopspying and 4 others

No it is not just you, I just noticed that I have the same problem.
Reactions: SeriousHoax, razorfancy, venustus and 5 others