Post updated in October 2022.
The current build of Windows 11 ver. 22H2 (clean installation) is not fully compatible with Hard_Configurator. The SRP in H_C will work well if Windows has been upgraded from Windows 10 or updated from version 21H2 (or from the prior version). Unfortunately, SRP does not currently work on clean installations of Windows 11 ver. 22H2. See my post:
https://malwaretips.com/threads/simple-windows-hardening.102265/post-1008015 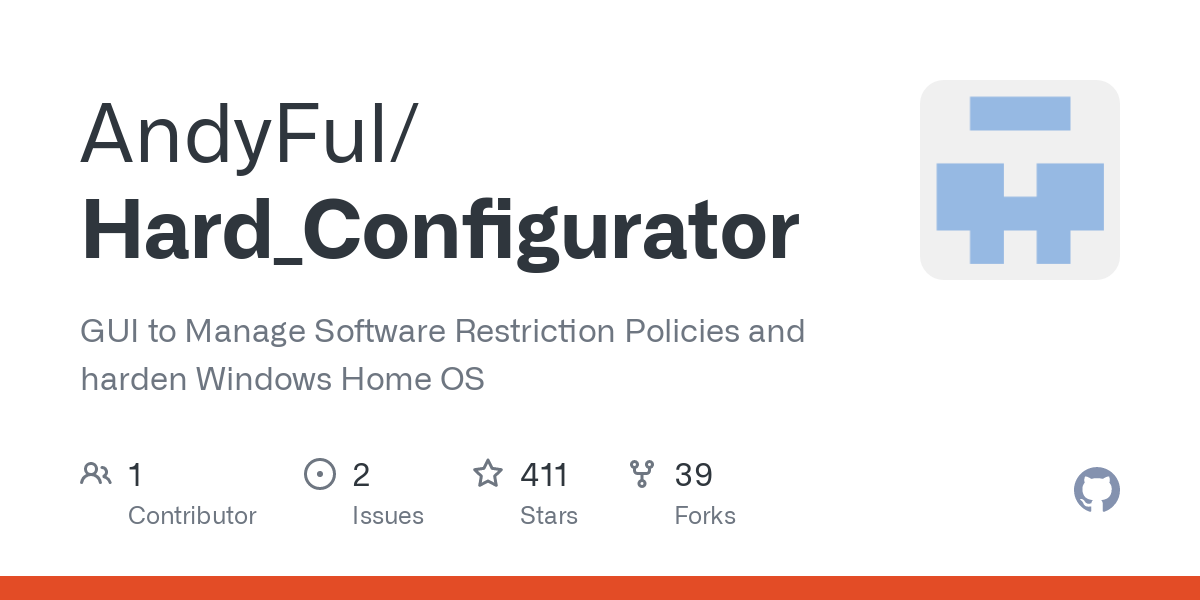 Hard_Configurator was created after a discussion on the below treads:
https://www.wilderssecurity.com/thr...ith-lua-and-srp-even-without-ultimate.232857/
Secure Windows - Software restriction Policies to Windows Home
Windows Pro owner? Use Software Restriction Policies!
Poll - Do you use security reg tweaks?
Run by Smartscreen utility

Microsoft documentation for Software Restriction Policies (July 2021):
https://docs.microsoft.com/en-us/wi...iction-policies/software-restriction-policies
This documentation was made for Windows Server (2012, 2016, 2019, and 2022), but SRP works the same on Windows 7, 8, 8.1, 10, and 11.
Software Restriction Policies can be applied alongside Applocker policies:

This topic for the IT professional describes how to use Software Restriction Policies (SRP) and AppLocker policies in the same Windows deployment.
learn.microsoft.com

This program can configure Windows built-in security to harden the system. When you close Hard_Configurator it closes all its processes. The real-time protection comes from the reconfigured Windows settings. Hard_Configurator can be seen as a Medium Integrity Level smart default-deny setup, which is based on SRP + Application Reputation Service (forced SmartScreen) + Windows hardening settings (restricting vulnerable features).
Hard_Configurator makes changes in Windows Registry to accomplish the tasks enumerated below:
(...) and some more ...

Many of the above tasks can be made by using Windows RegEdit. Anyway, with Hard_Configurator, it can be done more quickly and safely.
This program was created for advanced users to secure inexperienced users.
Last edited: Oct 20, 2022
Reactions: anirbandutta01, brambedkar59, windows1064 and 74 others

Here are some screenshots. 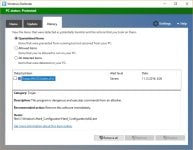 Will try with Exclude Options... 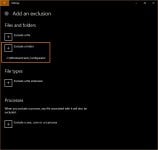 Will try with Exclude Options...
View attachment 126365
Click to expand...

Files submitted. Now, we will wait.
Reactions: Nevi, Correlate, spaceoctopus and 7 others

Can a hole folder be added to exception or can you add that?
Reactions: Nevi, Correlate, spaceoctopus and 6 others

Edited.
I think that there is a simpler method. If the executables are recovered from quarantine, then Windows Defender will ignore them.
Last edited: Dec 11, 2016
Reactions: Nevi, spaceoctopus, XhenEd and 4 others

Av Gurus said:
Can a hole folder be added to exception or can you add that?
Click to expand...

What do you mean?
Reactions: Deleted Member 3a5v73x and AtlBo

The simplest method is to recover quarantined executables. Windows Defender will ignore them.
Reactions: spaceoctopus, XhenEd, Deleted Member 3a5v73x and 2 others

Andy Ful said:
What do you mean?
Click to expand...

I mean in Hard_Configurator.
There is only Whitelist by Hash. 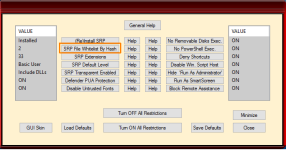 I have a folder with 20 portable apps and would like to add that folder to Whitelist, not one by one.
Reactions: spaceoctopus, XhenEd, Deleted Member 3a5v73x and 2 others

I understand. Now, there's no such option. It can be added in the next version (whitelist by path). Do not you afraid to whitelist the folder in the User Space, and make the loophole in the security?
Whitelisting by hash will take you about 5 minutes.
Last edited: Dec 11, 2016
Reactions: windows1064, Nevi, spaceoctopus and 6 others

But on the other side, there is such option in Windows Pro SRP, so I think it can be useful for advanced users?
Reactions: spaceoctopus, AtlBo, Deleted Member 3a5v73x and 1 other person 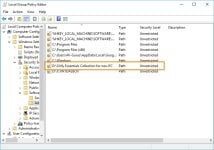 You have three folders whitelisted by path in SRP (the paths: C:\Users\... and D:\...). The first path I think, is for Google Chrome and others for portable applications. All those folders are vulnerable to drive by attacks - you can run any program from those folders and bypass SRP. You are advanced user, so you know what you are doing. For inexperienced users, whitelisting by hash is much safer.
By the way, I did not see a malware file in the wild, that could exploit the above loopholes.
Reactions: Tiny, AtlBo, DardiM and 2 others

Hard_Configurator is suited to advanced users who want to configure computers of inexperienced users. Inexperienced users first try to open/run/install files by mouse click or pressing ENTER key. This is protected by Software Restriction Policies and script blocking. So, media files, documents, photos, and already installed applications can be opened without any problem, but scripts and executables are blocked (in the User Space). Next, they try to use 'Run As Administrator' from Explorer context menu to bypass SRP blocking. This is protected by script blocking, and replacing 'Run As Administrator' by 'Run As SmartScreen'.
'Run As SmartScreen' performs SmartScreen check, and if the file is considered as safe, then allows to execute it. For inexperienced users SRP without 'Run As Smartscreen' is in many cases vulnerable to the 0-day malware attacks, if run with Administrative Rights. This can be more destructive than running files without SRP, because execution by mouse click (or pressing ENTER) does not automatically elevate integrity level. There is no such danger to experienced users, if they know why some files cannot be flagged with "Mark of the Web", and then must be ignored by SmartScreen App on the Run.
Yet, such security is not good for children, because they mostly do not respect SmartScreen alerts.

Hard_Configurator can be a good solution for inexperienced users if they:
* can respect SmartScreen check (always) and can get help from experienced user (from time to time);
* do not install many programs/games/utilities, especially when installed software is not popular;
* accept replacing the program that has problem with Hard_Configurator restrictions (rarely);

If so, the Hard_Configurator restrictions do not cause problems with always changing Windows OS, and provide very good security. This is especially important with Windows 10, where many antimalware programs can still have serious issues after system updates.
Reactions: Nevi, DDE_Server, caba and 6 others

@Andy Ful Thanks for sharing your program. I like your idea of protecting the computers of inexperienced users by utilising system tweaks. My parent's laptop is currently protected by KIS 2016. Would the changes made by your program be compatible with KIS?
Reactions: Nevi, Sunshine-boy, AtlBo and 3 others

askmark said:
@Andy Ful Thanks for sharing your program. I like your idea of protecting the computers of inexperienced users by utilising system tweaks. My parent's laptop is currently protected by KIS 2016. Would the changes made by your program be compatible with KIS?
Click to expand...

I think so. But, with KIS they do not need additional protection.
Reactions: Nevi, Sunshine-boy, AtlBo and 1 other person

Thanks. Confirmed on Windows 7 64Bit. I will work on this. It seems to be connected with not supporting 'SmartScreen on the Run' by Windows 7.
Reactions: Nevi, AtlBo, Av Gurus and 1 other person

askmark said:
@Andy Ful Thanks for sharing your program. I like your idea of protecting the computers of inexperienced users by utilising system tweaks. My parent's laptop is currently protected by KIS 2016. Would the changes made by your program be compatible with KIS?
Click to expand...

But anyway, script blocking or Untrusted Fonts protection may not be the bad idea. I do not know how effective is KIS with malicious scripts.
Last edited: Dec 12, 2016
Reactions: Nevi, Sunshine-boy and AtlBo